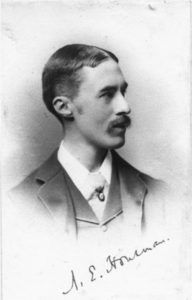 A.E. HOUSMAN was born near Bromsgrove in Worcestershire in 1859. The eldest of seven children, he entered Bromsgrove School as a “foundation scholar” at the age of eleven. He was inquisitive, quiet and studious – with a passion for learning Greek and Latin. He also wrote poetry, for which he won several school prizes. His aptitude and industry, as well as regular tutorials in classics from a demanding but supportive headmaster, won him a scholarship to St John’s College, Oxford. He arrived there in 1877, to read classics in the prestigious Honour School of Mods and Greats.

After completing the first two years of study, which focus on Latin and Greek, he gained First Class Honours in the Classical Moderations examination. The second half of the course focused on classical philosophers and political thinkers, which didn’t interest Housman. He may not have read enough or studied enough, and he may have been somewhat arrogant, but whatever the reasons he failed the Literae Humaniores Final examination and left Oxford without a degree.

He returned to Bromsgrove and taught for a brief time at his old school. In 1882 he returned to Oxford where he was successful in the examinations both for a Pass degree and then entry to the Civil Service. This led to a job as a clerk in the Patent Office in London, where Moses Jackson, his great friend at St John’s College, was already employed. After a day’s work at the Patent Office, he would often go to the British Museum Library and continue his textual analysis of the Greek and Latin authors that most interested him. In 1882 his first academic paper was published, on the Roman writer Horace.

In 1892, on the strength of twenty-five articles that he had contributed to classical journals over the years, Housman was elected Professor of Latin at University College London. After an intense bout of writing poetry in the spring of 1895, his first book of poems was published in the following year. It was titled A Shropshire Lad and has never been out of print. The 63 poems convey his feelings on the beauty of nature, the brevity of life, the fragility of love, the certainty of death. Many of the poems are set in a half-imaginary Shropshire, what he called ‘the land of lost content’.

One of the most characteristic poems in A Shropshire Lad – and also one of the most popular – is number XL with its many monosyllables, its four-line stanzas, its melancholy mood, its nostalgic yearning, its pastoral scenery, its melodious rhymes and rhythms:

Into my heart an air that kills
From yon far country blows:
What are those blue remembered hills,
What spires, what farms are those?

That is the land of lost content,
I see it shining plain,
The happy highways where I went
And cannot come again.

In 1911 Housman secured the coveted post of Professor of Latin at Cambridge University and was elected to a Fellowship at Trinity College. This is where he lived and worked for the next twenty-five years. In 1922 a long-awaited second volume of verse, titled Last Poems, was published to much acclaim.

Housman died in Cambridge on April 30th 1936, leaving notebooks that contained many unpublished poems. In the next eighteen months his brother and literary executor, Laurence Housman, published many of these as More Poems and then, as part of his memoir, Additional Poems. Housman’s ashes were buried against the north wall of St Laurence’s Church, Ludlow. In 1985 a statue of him was erected in Bromsgrove’s pedestrianised High Street.

Further information about the Society, books and merchandise, and events, contact:

Payment for books and merchandise may be made by: Payments should be tagged “merchandise”. Please add £2.00 for UK postage or £4.00 overseas.